trusted online casino malaysia
0
was successfully added to your cart.

Dealing With Guilt And Regret

Teshuvah is when you start to sin and stop it. God is no longer angry at you and he will not punish you for this sin, but it’s not like you never sinned. To clean it up you do all these extra things but the forgiveness was already there and that’s why Yom Kippur is not a day of forgiveness. Kippur doesn’t mean forgiveness – kippur means cleansing. You want to erase even the memory of it but you’re already forgiven when you stop sinning, which could have been before Yom Kippur.

Some people cannot forgive themselves even after God has forgiven them, which takes all of the attention away from God. The reason you did something bad in the first place is because you were just thinking about yourself. You can’t be the criminal and the judge, so forgiving yourself makes no sense because no one is asking your opinion about yourself. According to the Chasidic teachings in Tanya, you should be grateful for the discovery about yourself that you had an impulse to sin but didn’t do it. A good person is not someone who never gets into a bad mood – a good person is someone who even when they’re in a bad mood doesn’t do anything bad.

If you commit a sin and then regret the sin you committed, the person committing the sin can’t be the same person as the person who regrets the sin. Real Teshuvah means you separate yourself from the one who did the sin and become a different person who would never do that sin. When you sin you’re sinning against your better judgment, and then you regret the sin because you never wanted to do it.

Knowing Yourself, Inside and Out

For most of history, human beings who were thoughtful, responsible, and mature understood that they have free choice. You can be good or you can be bad, you can be beautiful and you can be ugly, you can be idealistic, or you can be low, greedy and selfish. We have good inclination and evil inclination, and we can either be constructive or destructive. For so long, humans lived their lives based on reward and punishment.

One of the souls is Godly, which means it gets 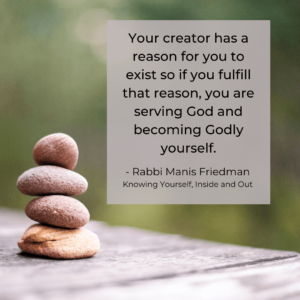 excited by Godly pleasure, Godly will, Godly wisdom, Godly emotions, and Godly behavior. With those aspects of your soul excited, you’re a complete person. Then there’s the human soul, but in the human soul it’s all human pleasure, human will, human intelligence, human emotions, and human behavior. My human part is selfish – it’s always about me. The Godly soul is all about a mission, what I am here for and what I am supposed to accomplish.

You are a being that can choose between being human or being Godly. You should put all your energy into your Godly soul, because if you put all your energy into your human soul you will become a really decent human being without knowing what it’s all for. The only source of knowledge that can answer the question “why am I here”  why was i born is in your Godly soul. That’s because your Godly soul just wants to do whatever is the reason for its existence in this world and whatever mission the soul is supposed to accomplish by being born. You can be practical and successful as a human being, or you can be idealistic and find the truth of why you exist in the first place. Your creator has a reason for you to exist so if you fulfill that reason, you are serving God and becoming Godly yourself.

These are questions we all ask ourselves, all of them based on the assumption that “we need.”

It seems the younger generation doesn’t understand this. A grandfather tells his grandson to get up for prayers, “you need to get up!” But the same thing keeps happening: the grandson simply says “no i don’t!”

The grandson is correct.

We didn’t ask to be born, but God needs us on this earth. He is the one who “needs,” not us.

Why all the talking?

Couldn’t God just let us know what we need to know in one shot?

In the desert, it was common that when a Jew asked Moses a question he didn’t know how to answer, Moses would go ahead and ask God. This happens over and over.

Surely God can find more efficient ways to get his message across. Why no writing on the wall? Why couldn’t God just put the answer in Moses’s head?

What is clear is that God does not need to talk to us. He just loves it.

When we recognize that the Torah is a love story, things start making sense, and questions fall away.

The Torah is full of dialogue, which means God loves talking to us.

We have become vastly improved because of the lockdown. We have a better world today; you just don’t see it in the news. But everybody knows in their own life that things got better – we matured, we were wiser, and we’re kinder. Now all of that positive improvement is concealed behind the riots and the fear of a repeat of COVID.

Recently many people have gotten caught up in the argument between the idea the “Black lives matter” and “all lives matter”. Either way, focusing on the idea that lives “matter” reduces things so much. We need to get beyond the idea of “mattering” and strive for something more. “Lives matter” makes life negotiable – matters how much? Matters to whom?

Life is sacred. What that means in simple terms is that it doesn’t matter whether life “matters”. You’re not allowed to murder and you’re not allowed to steal – even if life doesn’t “matter” to you still can’t kill, and you can’t kill anybody. That’s morality, and that’s the core of Torah without any mention of race.

Along those lines, the whole structure of the police force needs to be rethought. The police does law enforcement, when they really should do law maintenance. You maintain the laws that people live by, instead of enforcing the laws the people don’t want. A democracy means people get together, write down their values on a charter and elect the government that’s going to maintain their values and a police force that will maintain the laws that they want to have. Instead, we’ve been putting laws on people who didn’t ask for it.  For example, we all believe that speeding on the road is bad, but sometimes we get distracted and do it anyway. The police aren’t there to force you to do what they believe is right, they are there to remind you of your own values! In case you should forget that you don’t believe in speeding, we have traffic patrol.

When we have cooperation, good things can happen. But if we don’t have personal values then you can’t have a police force because that’s just a declaration of war. We need an awakening. We need to simply find the failure of our lifestyle staring us in the eyes. The good news is that the way we’ve been living is such a colossal failure, and we don’t need any more motivation than that to change.

Does Judaism Have A Future?

In the past, the future had a very definite cast. Everybody knew that the future was secularism. Religion was no longer relevant. After the Holocaust it was all over – the Jews who came from Europe with all the traditions were going to be the last generation. America was not a place for religion, and every year there would be more secularism and less religion.

However, the Rebbe said that in freedom we can be better Jews. Freedom allows us to serve God with a whole heart and with no fear with pride. It allows us to share it with others, something we could not do in Europe for at least 2,000 years. The Rebbe says here in America if you teach people they can do everything because of their freedom. There are no restrictions here so Judaism will be better here, stronger, more enthusiastic than it was back in the old country. 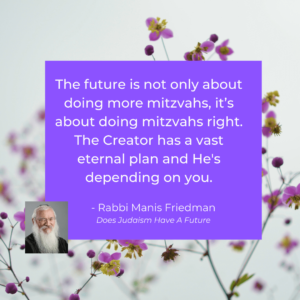 The Rebbe was very optimistic about the nature of American youth. The uncomplicated, honest straightforward innocent commitment that an American is capable of would bring fresh enthusiasm to the mitzvahs that we’re supposed to be observing and have been observing for three thousand three hundred years. Now it was going to be with more joy, totally voluntary, out of commitment, out of pleasure. What a beautiful picture compared to what was going on in Europe.

Now the future is young couples raising their children with the awareness that Judaism is alive and well, God is lovable, and God should be served wholeheartedly enthusiastically not only to maintain a sane society but to fulfill the bigger purpose for which we exist.

The message of Judaism has always been that God took us to Mount Sinai and gave us a Torah in which he describes the many many ways in which we can serve Him. He’s telling us what he needs from his creation, his wish list. Since receiving the Torah at Mount Sinai, that’s what we’ve been doing but recently we’ve lost our focus.

We are here because we are needed, not needy.  That is a divine truth. Therefore we can serve God with joy. Not only are we not burdened with needs, we’re actually fulfilling a vast eternal plan for the creator of the world.

If we are all here to serve the vast eternal plan that God envisioned when he created the world then we are indispensable to each other. I can’t fix the world unless you’re doing it with me because you have your piece of the world. God needs you for the same reason he needs me. That’s why we have to have one God – “One God” meaning one plan and one purpose for which we all exist.

We are not here to take care of our own needs. We are here to serve the creator, and every passing day makes that truth more compelling, more convincing, and more obvious. Anything we can do to further this cause and get more people to ask what they are needed for instead of what they need will make the world a better place.

There is a health hazard out there that isn’t getting enough attention. Loneliness. Or, rather, “aloneness.”

The only true remedy for aloneness is marriage.

But today we are seeing something very scary: men and women, who are married, still feel alone in the world.

This is horrific, if marriage doesn’t fix that feeling, nothing can.

This is happening because we are forgetting how to connect with each other. We get too distracted by each other’s attributes, we fall in love with things about each other, but forget the person themselves.

The solution is intimacy. True intimacy means removing all distractions and external characteristics until there is nothing left but the husband and wife, together, and when that happens they can dissolve into each other and become one. And then, neither will ever feel alone, forever.